And yet he, at least, goofed around with our boys. Me? I  dreaded everything from playing catch to pretending to be a dog (or both at the same time. Arooooooo!).

Turns out, this is not an uncommon feeling. A study of almost 4000 American parents, rich and poor, found that if a child says, “Draw with me!” most respondents felt they should stop whatever they were doing and draw with the kid. And in a piece for Slate,  Rebecca Onion shared her own reluctance to spend endless time playing with her kids. She noted that many parents report feelings of “failure and inadequacy” when they don’t want to play, or don’t think they are fun or stimulating enough.

Onion also found that while kids get some benefit from playing with the ‘rents, it’s not so much that you should beat yourself up if you’re not doing it. (For the record, my mom claimed she never played with me.)  Onion also heard from a pre-k teacher that kids whose parents have been ultra-involved in their playtime can end up being a little LESS creative and fluid, because their play style has been so directed by an adult.

It’s actually good to let them play on their own.

I got in touch with David Lancy, author of The Anthropology of Childhood. Prof. Lancy has studied childhood on four continents, in areas rich and poor; rural, urban and suburban. It was a great relief when he said that not only is playing with kids not crucial for their development or happiness, other cultures find the idea so bizarre that to them, adults getting down on the ground to play with the kids was as weird as a parent wearing a diaper, or drinking from a baby bottle. Here’s our discussion (edited for length and clarity).

Lenore: As an anthropologist, what do you wish modern-day parents understood?

David: To me the most important thing is to lose the guilt.

David: Everything. To recognize the fact that there are a few minimal imperatives in terms of [your child’s] health, their well-being, their diet, and their safety. What has happened is a sort of vicious circle where parents have a great deal of anxiety about their children, and the blogosphere kind of feeds that anxiety, and unwittingly the medical profession and educational system feed it, too. We need to start looking at the downside of all of these “must do” imperatives and see them as anxiety- provoking on the part of both parents and children.

Lenore: That includes the idea that you “must” play with your kids, right? I first heard about you years ago when you wrote a piece in the Boston Globe about how playing with your kids is considered unnatural – even bizarre – in many other cultures.

David: Yes. In most cultures, adults do not intervene unless the child is hurt.

David: Nowadays I have these next-door neighbors and they spend literally the entire day supervising and playing with their children. They’re pushing them in swings and bouncing them on a trampoline and they have this sort of plastic car that the mother bent over pushing. I can’t help but eavesdrop –

David: I suspect they bring an attitude something like, “Play is so important in children’s development!” And maybe the unspoken part is that play is way too important to be left to children.

Lenore: But isn’t is good for parents to play with their kids?

David: On a purely selfish basis, kids are wonderful. They’re a lot of fun to have around and interact with. But again, I would stress the fact that that’s a personal choice. Not every adult gets the same buzz. I suspect there are a lot of parents who spend a lot of time playing with children, guiding them, supervising them, because they feel an obligation. And they feel guilty because they don’t experience what they think should be the positive feedback, so they think there’s something wrong with them. They feel guilty.

Lenore: Actually, that was often me, feeling guilty because I wasn’t having fun. And yet, your research found that parents in most other cultures don’t feel guilty at all.

David: To put it mildly! I have yet to find any report of adults playing with children beyond infants. Babies do get played with a bit – passed around. They’re cute, you have to hold them anyway so you might as well jiggle them on your lap or bounce them up and down. But as soon as they become toddlers, the whole concept is that the child is really a burden to its caretakers and the sooner you can reduce that burden by shooing that child off to go play with its siblings, the better.

So when nosy anthropologists like me go into a village and ask questions like, “Do you play with your kids?” the answer is usually, “Why would I? Children play very well by themselves.” It seems like a stupid question to them. Nobody plays with their children. Adults hang out with adults. Little kids may hang out with adults along as they are unobtrusive. They’re welcome to observe, to eavesdrop. That’s how they become adults — by copying the behavior they see. But children are supposed to figure all this out on their own and at their own pace. There’s no curriculum.

Lenore: But we can’t expect kids to learn everything on their own today. There’s a lot that parents must teach them, right?

David: As soon as you bring mandatory schooling into the equation, it sort of opens the floodgates to all this other control and management of children’s behavior.

Lenore: What do you mean?

David: The school model introduces into parenting the notion that children only learn by adult instruction. Children’s natural, spontaneous experience of the world is not considered a reliable means for ensuring their successful development, so there has to be this filter, and the filter is composed of an adult. They provide “instruction” – micro-lessons all the time.

Lenore: You mean, once school became the only accepted model for how kids learn, it became the model for parents, too? Like, before there was school, adults didn’t see kids as students in need of instruction?

David: Yes. The culture of schooling infects the culture of parenting and the culture of children’s play. So, for instance, instead of playing pick-up baseball now kids have this highly structured, highly pedagogical sports activity which is all about following the directions. It involves coaches and setting goals and ranking.

David: No. That’s not what the historical or ethnographic record suggest. For instance, ethnographers have seen kids playing with knives or in dangerous situations near fire and sharp tools and so on. They’re looking at that with considerable surprise and concern: What’s going on here? Parents, when queried — and quite a few anthropologists have actually made these inquiries – will say, “Well that’s how they learn!” Or, “How else are they going to learn? If they cut themselves, that’s part of the learning experience.”

Lenore: So what is the role of the parents when it comes to teaching our kids valuable lessons?

David: A role that I would describe more as a role model. It’s very important to allow children to observe carefully, and to pitch in, and to be involved to the limits of their ability. And I do see parents making some allowances for the child – perhaps slowing down what they’re doing, like a mother who’s making pots and she’s got a little toddler who wants to be involved. She’ll give the toddler a lump of clay and inevitably they’ll play with that clay and learn the properties of that clay, and all of this is to the good.

Lenore: Are clay-pot-makers at all relevant to us parents today?

David: The point is just to remind everybody that these kids turn out just fine. They learn a great deal. We’ve allowed schooling to influence how we think about child development and parenting. There’s this notion that children always have to be taught.

Lenore: Yes – that we must fill their days with “teachable moments.”

David: So the anthropological literature reminds us that kids are capable of learning a good deal on their own. And in fact, by denying children the opportunity to help out, eventually the desire [to copy and try and help out] is extinguished. Avenues of learning are closed off, and this is a fairly severe handicap going forward.

Lenore: In other words: If we stop thinking our kids won’t learn anything unless we teach them like a teacher – “Look at the rose, sweetie! Rose starts with R!” – they will still learn plenty? Parents don’t have to make everything “educational”?

David: Well, if they’re happy keeping all those balls in the air, I wouldn’t try to talk them out of it at all. I’m just trying to relieve any sense of guilt or anxiety in terms of not doing enough for their children, or not doing it exactly the right way. That’s my concern.

Lenore: Not that we have to move to a village and take up pottery making?

David: Just think twice when you’re trying to place yourself between your child and some part of the environment. Step back and see what happens when they tackle it on their own.

Long story short: There’s nothing wrong with not playing with your kids. In fact, the Let Grow mission is all about raising independent kids who know how to entertain themselves. Want to try it for yourself? Learn about the various Let Grow projects and consider bringing them to your school or family. 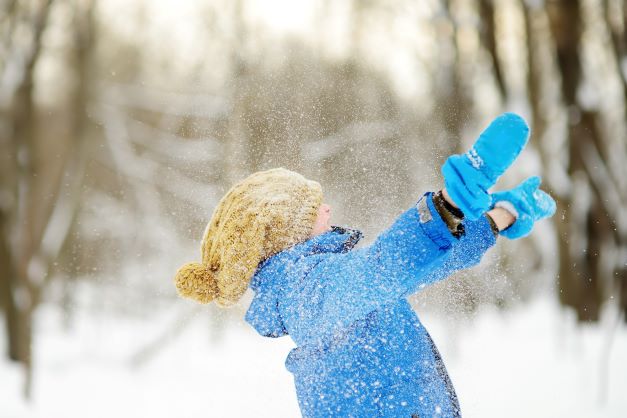